I usually eat a far amount, mainly I think because of my job on a building site. I was starting to gain weight, 145lbs is quite lean for me but then bulked a little to 150. at 150 I notice the weight gain was just fat around the middle so cut back on my eating a little and soon dropped back to 145lbs (2 weeks), at this weight I have good ab definition.
My plan is to drop even more to about 140lbs then I'll be really trim. I don't follow any kind of diet method, just eat mainly the healthy stuff. I went to McDonald's last Saturday and went for the chicken bacon wrap and just a coffee, much lighter than getting their bigger burger and fries, the main thing was to eat small.
Sometimes on the weekends me and my wife will pop into a fast food place on our walkabout but now go for something lighter than the burger and fries thing. The rest of the week is generally very healthy food. 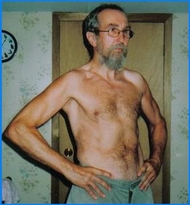 Knowing yourself is the beginning of all wisdom. ~ Unknown
Top

i saw that movie too henry fat sick and nearly dead. it changed my diet for the better.
sorry i havent posted in a long time. i started a reboot 2 weeks ago and feel great.
body weight exercises are the best, all the machinces are no comparison.
Top

I use to have a juicer years ago and we never used it much and sold it at a yard sale, back then we only thought of fruit juicing. some years later I saw a youtube of a body builder making their own V8 Fusion which was mainly veggies, this got us to get a cheapo juicer again. My daughter dialed us into watching Fat, Sick and Nearly Dead and that led to getting a better juicer. We still juice, making batches twice a week, enough for me and my wife to have a glass every morning with breakfast. we've been juicing for a few years now. Always carrots, beets, celery, ginger and green apples, often we'll add parts of veg not cooked with like the thick parts of broccoli or cauliflower. Sometimes we use sweet potato which is pretty good. The cheap juicer was fine but could only make small amounts before having to clean it out.

UPDATE: Well I got down to 142 lbs and got a trim waist but on the other hand my arms also got skinnier, lost 1/2 an inch on my biceps. Also working on a building site I started to notice I was starting to feel sore from general work. What I basically did to lose weight was cut back on work food which mainly included 3 chicken sandwiches and a protein bar, cut back to 2 sandwiches with less chicken and a granola bar. At home my wife eats light and I eat more like her. For me I think I'm going back to what I normally eat and get back to around 150+lbs.

Knowing yourself is the beginning of all wisdom. ~ Unknown
Top

my daughter bought a juicer and she loves it but i have yet to use it. i have been using my wifes personal blender to make protein shakes in the morning i've been skinny all my life but the last few years i've gotten a belly. i've been working out a month now and have lost seven pounds.
my wife is doing lots of cardio and has lost 15 pounds, she looks great. i started some stupid informercial workout and it was killing my back and knees.
i said " the heck with this" i'm going back to dt. i feel great and its so much safer. dont know why i left.
Top

I mentioned above that I got down to 142 lbs and lost 1/2 an inch on my biceps. But then remembered that I usually measure my arms pumped and that the lost size was mainly just being cold, so worked my arms a bit and found I didn't really lose any size, just a tiny bit. It feels good to have a trim waistline and will work to keep it that way.

Update: I just did a workout and actually my biceps are a little larger now at 142 lbs than at 150. I never wanted to lose weight before because it usually meant losing size.

Knowing yourself is the beginning of all wisdom. ~ Unknown
Top
Post Reply
5 posts • Page 1 of 1

Return to “How it feels to be an Atlas Student!”